In 2008, Literacy Link South Centralreceived funding from the Ontario Government under Employment Ontario and developed an extremely popular resource titled, Succession Planning for Literacy and Basic Skills Agencies and Networks. This resource is a tool kit with a wealth of tools for agencies to use as they consider the future human resource requirements of their agency. This resource was originally published in June 2009 and was updated in 2011.

Community Literacy of Ontario is very pleased to have worked in partnership with Literacy Link South Central to adapt Succession Planning for Literacy and Basic Skills Agencies and Networks to an online module on our Literacy Basics Training Website. Whenever possible, the original tools have been incorporated directly into this module. To access the original tool kit you can visit,www.llsc.on.ca/node/108.

As Executive Directors or Managers of Literacy and Basic Skills (LBS) agencies consider retirement, the issue of succession planning becomes increasingly important. Being proactive by implementing a succession plan will allow even very small LBS agencies to continue to serve learners through a thoughtfully pre-considered replacement of one or more staff members that may result due to retirement, transition or unforeseen circumstances.

By 2025, more than 20 per cent of the population will be over age 65, double the proportion in 1980. There are currently five working-age Canadians for every person over 65. In two decades, that ratio will have dropped to only 3:1. That growing imbalance is only made worse by the fact that, even as Canadians live longer, they are retiring earlier: the average retirement age has dropped from 64.9 in 1976 to 61.4 in 2005. (March 2006- Conference Board of Canada)

In a 2008, Literacy Link South Central conducted a needs assessment survey with more than 20 of Ontario’s community-based, school board, and college Literacy and Basic Skills agencies:

A careful and considered plan of action ensures the least possible disruption to the replaced staff person’s responsibilities and therefore the organization’s effectiveness. A succession plan clearly sets out the factors to be taken into account and the process to be followed in relation to retaining or replacing a current staff person.

To start the succession planning process, it is vital that both the Board of Directors and the senior staff at your agency are ready to commit the time and resources it will take to develop and implement solid emergency plans and long-term succession plans.

What Is a “Succession Planning” Approach?

The Connection to Performance Management 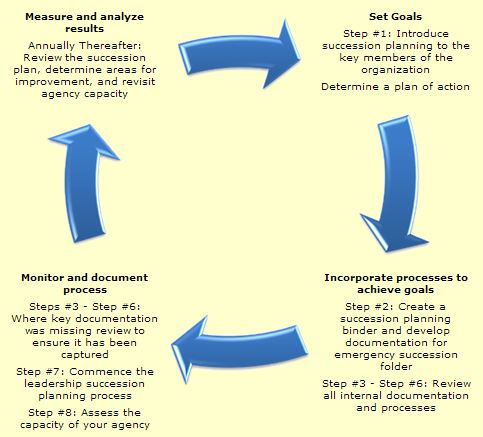